Berlin has had many residents that have shaped its history. You’ve met some of the industrialists. Meet some others:

There are so many more, too numerous to mention, but no less important – they served and now serve our community every day. The Berlin Historical Society is thankful to all of them.

A new 2019 exhibit honors one of Berlin’s own, Alphonse “Al” Pegolo, who served in the Army during World War II. He was part of D-Day invasion and the Battle of the Bulge. Come to the Museum and learn his story. (Artifacts were generously donated by the Pegolo family.) 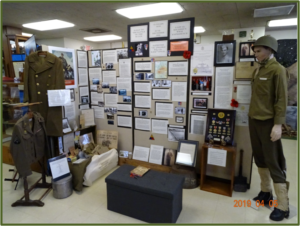